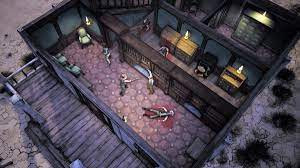 Devolver Digital have announced that a western-themed action RPG Weird West is coming to Xbox One, PS4, PC, and PC this Fall and they gave us a trailer to gawk at in the meantime.

The game was developed by WolfEye Studios, the same team behind iconic titles like Dishonored and Prey. Described as a “dark fantasy reimagining of the Wild West” that mixes cowboys with creatures from myths and legends.

Weird West features five specific stories also known as Journeys. The first one is Oneirist, a story that lets us see the future and combine magic with guns. The Pigman tells the story of a manwho has a pig’s head swapped with his own. The Bounty Hunter lets you uncover the mystery behind your son’s death and your husband’s disappearance. We also have Werewolf – a story where you will find yourself waking up from a usual bout of lycanthropy with a burning mask.

Weird West is coming to Xbox One, PS4, and PC this Fall. You can watch the trailer below: