Grow: Song of The Evertree Review

Grow: Song of the Everytree calls to us, to battle the Withering, and revitalise the tree and town. Come join us and help!

Thanks to PR for giving us a code on this one! 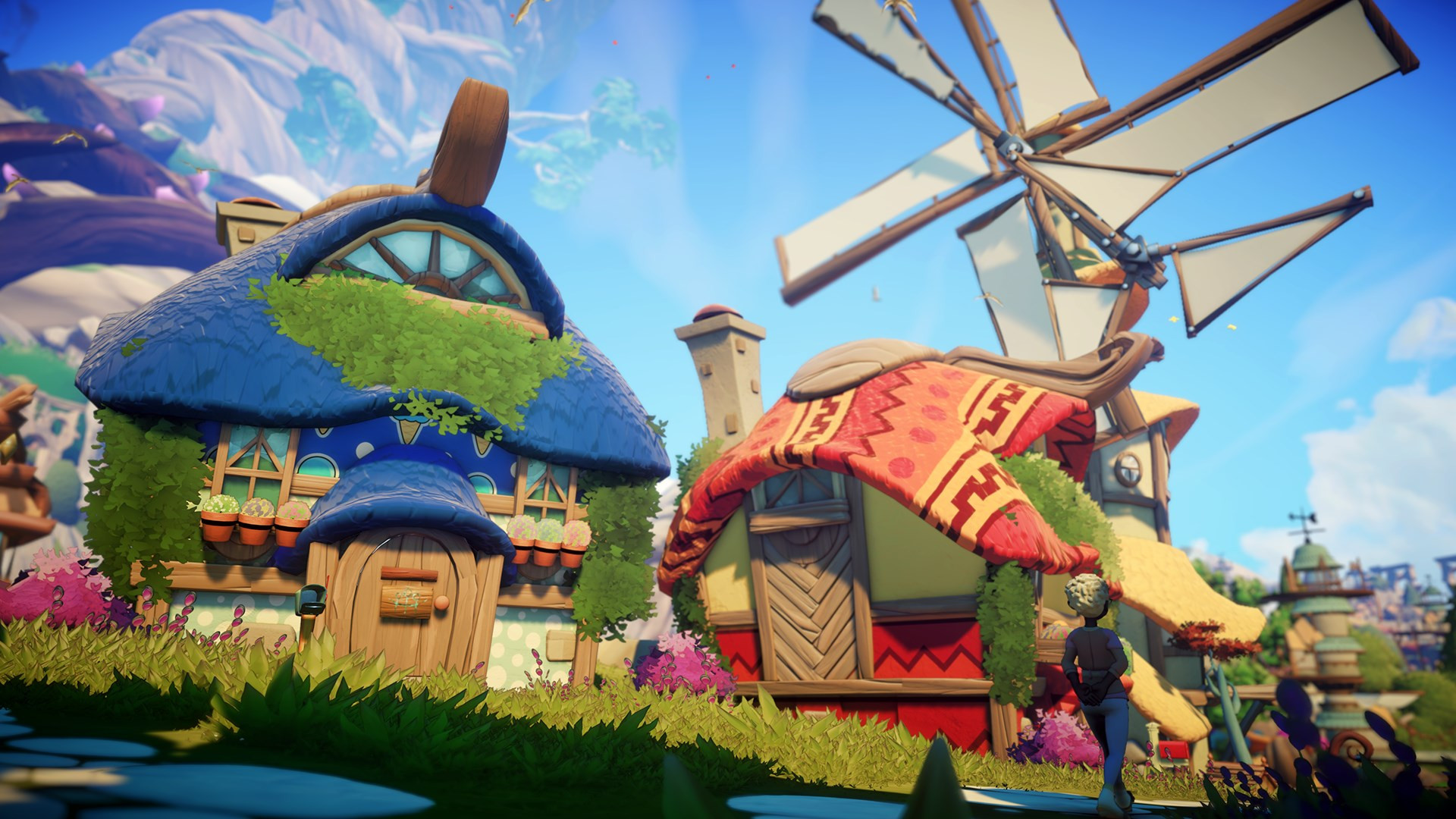 Grow: Song of the Evertree is going to feel familiar to anyone who loves the idea of life-sim, time-management, community and relationship building games. It’s a warm, relaxing, fun, and uplifting experience with tons of heart and soul poured into the game. Grow casts you as one of the remaining Everheart Alchemists and tasks you with returning the fabled Evertree to all its former glory.

To do this you must push back the Withering, a dark corruptive thorn-like presence that chokes the Evertree and breaks its connection with an ancient and powerful force, as well as the Song of Myora.

After you create a character from a bunch of template faces and so on, the usual fare, you can pick your gender. It’s here where Grow allows male, female, or a third option to assign no gender at all. Allowing you to create a non-binary character or gender fluid person if you like. After this you’re plunged into the world of Grow at a steady pace and drip-fed lore as well as handed the tools you’ll need to bring both the tree, and your fledgling community back to life.

The idea behind Grow is a simple, but effective one. You take materials you harvest in-world and combine their essences via alchemy to make a World Seed. This seed is a randomly generated branch of the Evertree, and using the RNG elements of the essences you get a unique world each time – along with flora and fauna.

With the aid of your trusty flying creature (you can name them too) you can visit that branch and see what’s to be done to bring it to life.

Once you get the early stages of the tutorial out of the way, you can explore the world of Grow a lot more. It opens up, in stages, as you push back the terrible Withering and embark on a mix of world creation, tending, and town management. 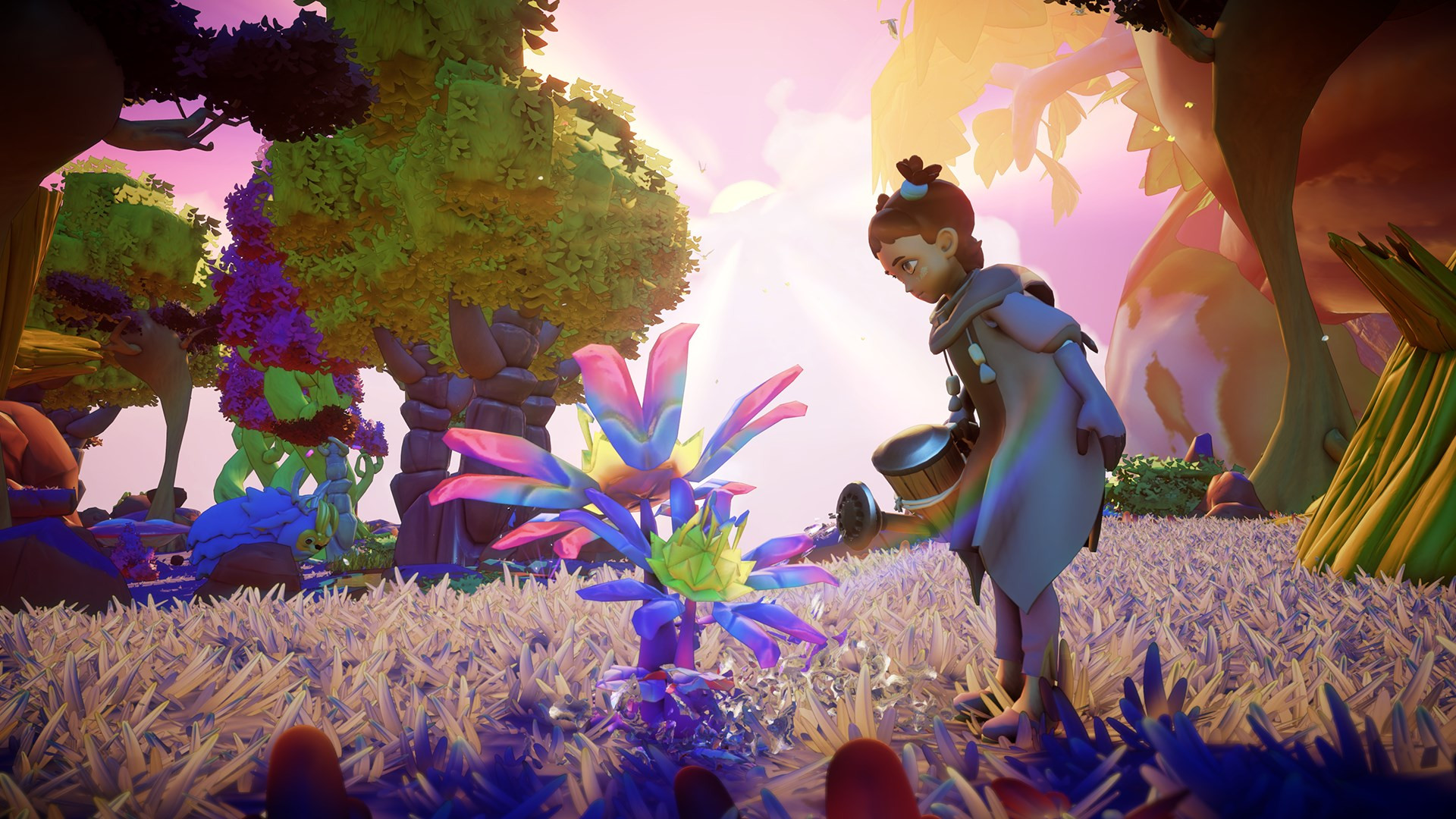 You tend to a world doing small tasks like breaking rocks, pulling corrupted weeds, collecting and capturing corrupted creatures and so on. You can play seeds, water them, and slowly grow a new world day by day. As you do this, you’ll generate essences, find collectibles, and gain Myora – the essence of the Song and the resource which you can use to buy things in the world – as well as build certain things.

Each day the world will gain the same kind of tasks, which like Stardew Valley’s farms and so on, are repetitious but not to a point where you’ll overly tire of them. There are also secrets and hidden places on each world branch to explore, like hidden caves for loot.

Once you have done enough, you’ll get a stage of growth to the world, and you’ll see it change when you visit it again. Here you can harvest precious resources and gain essences for further projects.

As the Everheart Alchemist you’ll attract people to your town, childhood friends, love interests, and workers alike will flow into your little domain. You need to keep people happy, build buildings, assign them jobs and homes. You can redecorate to your hearts content as long as you have the right resources, and special tags that you can find out in the world as you explore or build up the Evertree.

Fortunately, town management is a cinch and uses a simple system to oversee the growth of your place. Unlocking new things to build by doing things in game, and eventually opening up three whole districts with their own themed area and airship docks.

Building and placing buildings is easy, and so is assigning people and jobs. It all works really well, smoothly and is a pleasure to use the system.

With systems like this Grow never puts too much (if any) pressure on you barring time, and even then, it’s always possible to do things another day. It doesn’t want you to get frustrated, it wants you to drink everything in at a leisurely pace and even go fishing now and then.

If you know of Yonder: The Cloud Catcher Chronicles, then you should be familiar with Grow – this is the same developer and they have put their heart and soul into a game about the environment and growth, showing they grew as a dev over time and were able to take on far more ambitious and challenging projects like this.

To match the gameplay, you have charming and extremely well-made aesthetics that make Grow a visually pleasing game too. It looks gorgeous and runs smoothly on an Xbox Series X with very Studio Ghibli-esque visuals. From the character, creature designs, to the towns, and the world itself – Grow has a lot of visual flair, working to create a sometimes dream-like landscape and a sumptuous artistic vision of fantastic worlds.

Grow is a gorgeous game basically.

There’s a Fable-esque sense to the game too, especially in the character motion designs, and pressing Y in succession causes the character to jump. A very cartoon-y jump that’s described in-game as a frolic. The whole suite of animations to Grow show how far the developers have come since Yonder, and it is basically perfect for the style of game. From chopping down trees, to watering seeds, and singing the Song of Myora – the whole game resonates with style.

Also, if you fall from a great height, your character will pop an umbrella to land safely – this can be used in some traversal challenges to get hard-to-reach secrets – a familiar return of an old favourite of mine from Yonder.

The Song of Grow

The music for Grow is lovely, again, reminiscent of the Studio Ghibli films and has a serene dreamlike quality to it, relaxing, and enchanting at the same time.

There’s no voice work so you’re free to narrate the characters as you see fit In your head.

More than the Sum of its Parts

Like the branches on the Everytree, Grow is more than just the sum of its parts. Each element has been put into the game for a reason, and the mechanics interlock to work nicely as a whole. The town planning/building, the alchemy system, the care and attention to the Evertree all flow nicely along with the organic nature of exploration and the plethora of secrets and puzzles waiting for the player to find.

It’s a lovely game, one worthy of your time. 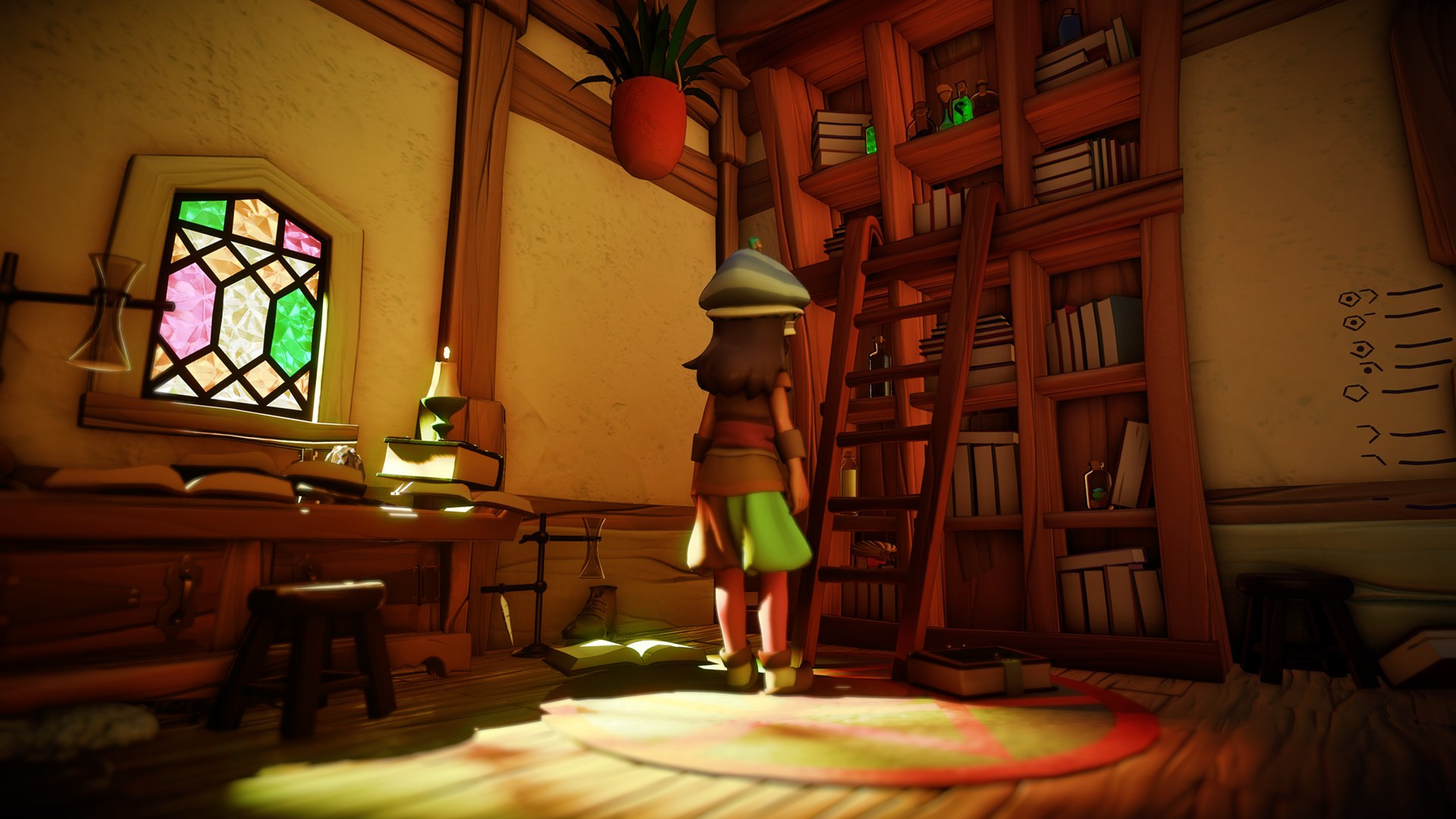 Grow: Song of The Evertree