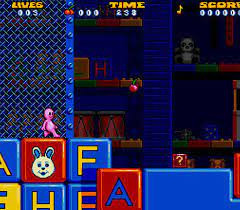 Jellyboy is a platforming platformer that lets you take control of a malleable hero. Originally released in Europe only, this is a game where you have to escape a candy factory while collecting puzzle pieces and surviving a raft of enemies. Bombuzal is a puzzle game where you have to utilize your Bomberman skills to find a safe ground in isometric levels filled with explosives.

Finally, Claymates is a platforming spin-off of Interplay’s not-so-famous ClayFighter series, and it sees you playing as Clayton, the son of Professor Putty. You’ll be navigating through levels by transforming into one of five different animals, each with their own unique ability. A Doctor Jekyll & Mr. Hide kind of thing.

All three games will arrive on Nintendo Switch Online on July 28. You can check out the trailer below: